The sun was hot and bright Tuesday afternoon as the 2015 Tour de Rock contingent reached the smiling faces and open arms of supporters at Beverly Corners on Day 10 of their campaign to raise funds for the Canadian Cancer Society and pediatric cancer research.

North Cowichan/Duncan RCMP member Ian Wetzel-Eden, that detachment’s rider this year, said it was a homecoming like none other.

“Coming home and seeing the support from your own community is totally different than rolling into some other communities,” he said. “We see them pull together but to come home and see the friendly faces and how everybody comes together — we’re all coming from different walks of life in the Valley, but you see everybody come together as a community and that’s something really special.” 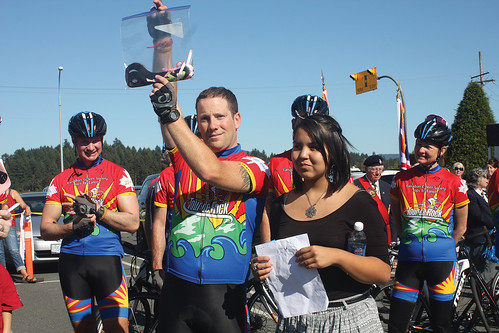 The group wraps up its Island-long trek on Oct. 2 in Victoria after having started off at the north end of the Island on Sept. 19.

The sun has shone on the riders for the entire trip thus far.

“The weather has been exactly like this, sunny and bright,” Wetzel-Eden said. “I look at it as a blessing from all those kids who’ve come before us and have paved the path with sunshine. For those that didn’t win their battle, they’re making ours a lot easier and we’re so blessed and thankful for that.”

The group tackled the Malahat Wednesday, “No Big Deal,” Wetzel-Eden said, and made a few more stops before finishing up on Friday in Victoria.

“It’s coming to a close, it’s kind of bittersweet,” he said. “It’s certainly a journey worth doing.”

Wetzel-Eden said he will not take a break from his bike after the events are over.

“This has kindled a love for it in me,” he said. “It’s more than just cycling now, it’s about promoting health as well. It’s not just for cancer, it’s about living healthily and this has certainly taught me that.”

Cowichan Tribes man worried he was target of trailer hitch

Lady of the Lake returns to Lake Cowichan

Mariah Segee takes the crown in first pageant since 2018

‘Very much appreciated the help from so many people. I hope the very best for all of you’

10 years ago: Where were you during the 2011 Vancouver Stanley Cup Riots?

Smashed-in storefronts, looting, garbage can fires and overturned cars some of the damage remembered today

The seven-month-old kitten had severe tail and femur injuries

In most cases, fraudsters impersonate an individual, business or agency seniors recognize and trust

Survey shows that confidence in vaccines has risen this spring

Inquest set into 2016 death of B.C. teen after a day spent in police custody