Only just released for off-Broadway presentations, the show is filled with catchy songs that leave the audience humming when they make their way home. 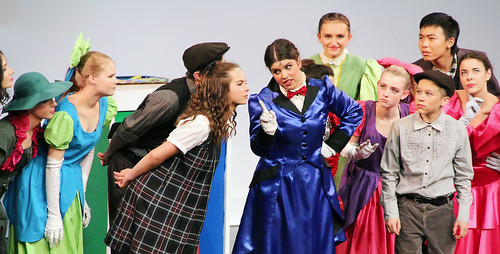 It’s no small challenge to bring an iconic show to the stage, but the young cast, directed by teacher Greg Hollett, was up to the job.

Led by Brenna Bazinet as the surprising nanny, Mary Poppins, and Jared Popma as the chimney sweep, Bert, they sang and danced their way through the entrancing score.

And what a score!

With songs like ‘A Spoonful of Sugar’, ‘Chim Chim Cher-ee’, ‘Jolly Holiday’, ‘Practically Perfect’, and, of course, ‘Supercalifragisticexpialidocious’, Mary Poppins has a lot to offer an audience of all ages.

On top of great performances by the two leads, the audience also enjoyed following the adventures of young Jane and Michael Banks, (Kayleigh Morris and Ethan Kremer) and their parents, George and Winnifred Banks, (Lucas Hols and Lourdess Sumners) and the rest of a great supporting cast. A tremendous numbe of people put a lot into bringing a professional-looking show to the stage.

The show was enhanced by some dandy stepping from members of Judy Hogg’s Celtic Rhythm Dancer, while Tamara Alyward led the talented and enthusiastic nine-piece orchestra in the on-stage pit through the tuneful evening.

Time to try out square dancing