The dancers won the day July 31 as Duncan Has Talent finished up with its Over 20s competition.

Alyssa White and Lara Brunschott tied for first because judges Cathy Schmidt and Laura Cardriver admitted they simply could not choose between them. 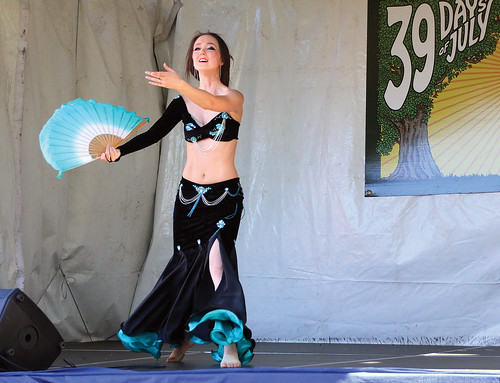 For photos from the event, click on the above image.

As in the other Duncan Has Talent events, the contestants had the opportunity for mentoring from Cardriver and Schmidt over two previous nights.

“This week has been more like a show because these people have been practising their craft for a long time,” Schmidt told the Friday evening audience and Cardriver reminded them all that it was important to show what they’d done with the advice they’d been given.

Keel kicked it off with Standin’ in the Redwoods, which he said was an autobiographical song and really showed his skill as a storyteller.

White, 23, who has been dancing since age three, then shook the place up by appearing in traditional Highland dance gear for a sword dance and then tossing it aside part way through as she completed her dance in modern style to Time of My Life.

Langton then performed his song, Harmony, explaining that as he had traveled widely in his work as a carpenter, his guitar was often his best friend on the road.

Leier presented, unaccompanied, a lullaby she composed after wondering if parents and grandparents even sing them to children any more.

Hieland, another belly dancer, opened her campaign with a Chinese love song in which a woman explains how her lover is everything to her.

Schmidt admitted, during the intermission, that all the performers had made it tough for the judges because they “took every ounce of mentorship we gave them. You’re going to have to bring even more,” she warned them all.

Keel played his trump card, bringing his little dog, Priya, on stage with him as he presented Nobody Loves Me But My Dawg.

Not to be outdone, White tossed her Scottish background aside and presented a lively swing dance to Candy Man and Langton sang a song he wrote for his father, a veteran of the Second World War, which he called Cold November Morn.

Brunshott changed costume, too, and decked out in pastel blue danced to Fatafiti, a drum solo, before Leier sat down with a guitar, an instrument she admitted she hadn’t touched in 10 years and performed her song Build Me a Fountain before Hieland closed the evening with an improvised dance to Chrysalis.

As the judges deliberated, emcee Longevity John Falkner admitted that he thought “it would be a really hard decision” to choose winners.

Schmidt praised all the competitors saying “this is the biggest adult category we’ve ever had”.

Lady of the Lake returns to Lake Cowichan

Mariah Segee takes the crown in first pageant since 2018

‘Very much appreciated the help from so many people. I hope the very best for all of you’

What’s coming up in the A&E scene

10 years ago: Where were you during the 2011 Vancouver Stanley Cup Riots?

Smashed-in storefronts, looting, garbage can fires and overturned cars some of the damage remembered today

Inquest set into 2016 death of B.C. teen after a day spent in police custody

With COVID tamed, it’s a ‘grand reopening’ in California

No more state rules on social distancing, no more limits on capacity, no more mandatory masks

Match was Montreal’s first game outside of Canada in 2021