There’s love, wit, and tomfoolery at the Gem ‘o’ the Isle in Cowichan Station this summer.

For the fourth year running, the Shawnigan Players are lighting up the outdoor stage at Gem o’ the Isle Farm in Cowichan Station from Aug. 12-16.

This year, William Shakespeare’s comedy As You Like It treats Valley audiences to a playful tale of young love, mistaken identity, and rustic country life. 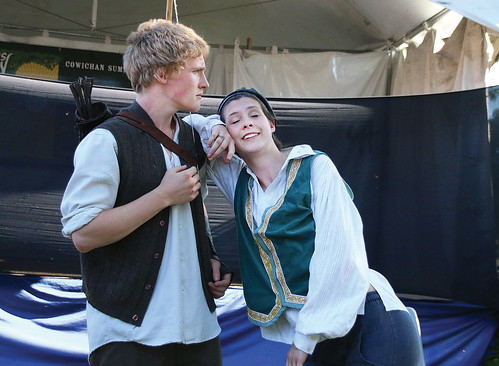 You’ll enjoy watching Rosalind, daughter of the downfallen Duke as she heads into the Forest of Arden fleeing her wicked uncle with her best friend Celia and Touchstone, the court jester.

But things begin to happen when she disguises herself as a boy named Ganymede.

Encountering her crush Orlando also hiding in the forest, she hatches a plan to test his devotion to her by offering to cure him of his love.

While the courtiers blunder about the forest, the country folk marvel at their peculiarities, and love blossoms in unexpected ways under the trees.

Shakespeare writes for everyone, so expect lots of colourful characters including wrestlers, goatherds, singers, and terrible poets in a show to delight the whole family.

As You Like It is director Alex Gallacher’s fourth production at Gem o’ the Isle.

Past summer productions at the Farm have included Pride and Prejudice (2012), Twelfth Night (2013), and 2014’s Romeo and Juliet, which went on to win Best Ensemble at Theatre BC’s South Island Zone festival.

All have been wildly popular with audiences of all ages.

In a vibrant cast, Rosalind is played by Hannah Gallacher with Jacob Dennison as the lovesick Orlando, while Valley favourite Bob Norris rules the forest as the kindly Duke Senior.

Sarah Simpson column: A shift in perspective can sometimes change everything

Have you even been forced to wake up at 5:30 on a Saturday

For the first time since October, the province is reporting zero new… Continue reading

The huge jackpot has remained unclaimed for several weeks now

These birds don’t often touch down on their way between northern B.C. and Mexico

70.2% of eligible citizens 12 and older in the province have received a dose of the vaccine