They couldn’t make the day originally scheduled but all the under-21 Duncan Has Talent winners were available Tuesday evening, July 28 so the annual windup gala was held before the event finished July 31.

That worked out well because they were the ones who won the bursaries generously provided by the Duncan Lions Club from their Sassy Lion store funds. They also received keeper trophies.

A big crowd came out to see them perform one last time. 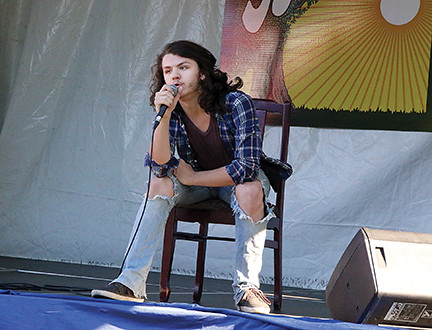 Duncan Has Talent started with the dancers but they were last on the tasty menu July 28.

Third place songwriter Naomi Davies didn’t bring her guitar because she didn’t expect to be asked to play but she borrowed one and sang her song, Chasing Rainbows, again to open the show. She was followed by Adam Townsend, who placed second, performing The Sum of All High Hopes and finally the event winner, Patrick Dixon took the stage to reprise his song, Alien Prison Break.

The next category to perform was cover/show tunes.

Hana Khan (third place) kicked it off with Faithfully by Journey, followed by Mary McGill singing Radioactive by Imagine Dragons before the event winner, Kasper Cooper took the stage to present his stunning rendition of Josh Turner’s Your Man.

Finally, the dancers stepped up.

Editorial: Forethought vital in our future fight against invaders