There was plenty of anticipation in the crowd as the finals of the Duncan Has Talent dance competition got underway Friday evening.

But everyone was looking over their shoulders, too. Rain had really dampened the previous “mentorship” evening and the skies were threatening again.

Sure enough, a downpour ensued but all five dancers shrugged it off, giving superb performances and keeping the crowd glued to their seats. 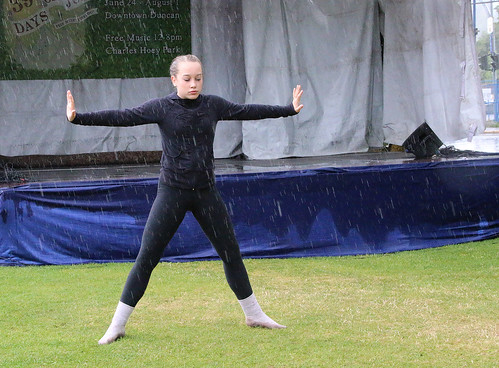 Yes, it was that close, according to mentors/judges Cathy Schmidt and Laura Cardriver.

They had urged the dancers to take everything they had learned during the week and “really sell it” during their performances and, since they all did what they were told, decision-making was brutal, Cardriver said.

Some costuming ideas were tossed out as the dancers followed Schmidt’s advice to dress for the weather, but that bothered neither dancers nor audience as the lively show continued.

Mitchell and Alora Killam faced the worst of the deluge as they danced on the grass, but they continued, smiling to the end. A quick consultation was needed before Cook did her final dance — a pointe ballet performance — because of all the water pooling onstage from the heavy rain blowing in. But, her teachers said, if she made sure to get right up onto her toes, all would be well. And it was.

A special extra treat Friday night was a brief performance to ‘Footloose’ by all five dancers, a number they choreographed themselves, following a challenge by the judges the previous evening. The crowd called for an encore and afterwards and there was even talk of expanding the number slightly and entering it in next winter’s music festival.

Duncan Has Talent continues this week in the originals/instrumentals category with that final starting Friday at 5 p.m.

Town hall on proposal for new marine conservation are postponed

Robberies, shoplifting on the rise in Duncan area, RCMP say