The school had registered as a participant in the nationwide parallel vote program and students in Div. 1, 2 and 3 — all Grade 6 and 7 plus a few Grade 5 from a split class — had been taught about political parties and how an election works and then encouraged to take an interest and discuss the subject at home, according to principal Lenore Underhill. 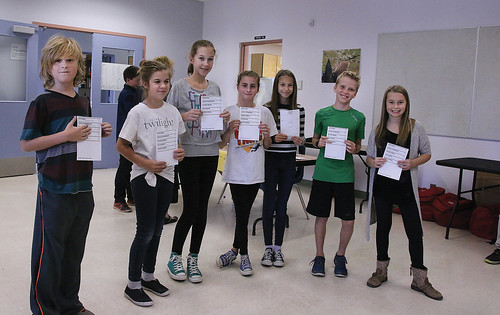 Then, last Thursday, in the multipurpose room near the school’s entrance, the students got to vote at a realistic poll, manned by some of their classmates who had been trained as deputy returning officers, poll clerks and scrutineers.

Schools who registered in the program all received a Student Vote Election Manual in PDF form, ballot boxes, voting screens and ballots with the names of local candidates running for election.

To adult eyes, everything looked very real, and as would be found at any polling station on voting day.

Lining up at their polls as directed, they were then carefully checked off the voters list individually by poll clerks Anna Beauchamp and Emma Fisher, given ballots with the names of the candidates for Cowichan-Malahat-Langford and directed to one of four voting places by scrutineers Clayton Bergstrom and Ross Sharp. Then, each one took his or her ballot to deputy returning officers Kal Nagy and Hayley Cage, who supervised the folding of the ballot and its insertion into the official-style ballot box.

Under the efficient handling of the Maple Bay poll team, the entire process went so smoothly that the three classes were finished well ahead of the expected schedule.

Underhill was delighted with the way it all worked.

There had been a lot of interest in the school population about the election and the poll team was obviously intrigued by what was happening as they went about their specified jobs.

It really was a great chance to practice something that will become real for the students in only a few years, Underhill said, explaining that students had been given a chance to see what a ballot looked like, and told how to mark it with an X, as well as what to expect at the poll.

Finally, after all three classes had voted, the ballots were carefully counted and the numbers recorded, ready to be sent to CIVIX, a non-partisancharity aimed at building citizenship skills.

Maple Bay students gave the win to Conservative Martin Barker (20 votes), with the Liberals’ Luke Krayenhoff (19) in second, the NDP’s MacGregor third (17), and the Greens’ Fran Hunt-Jinnouchi fourth with 8.

For the first time since October, the province is reporting zero new… Continue reading

North Cowichan considering fines of up to $50,000

These birds don’t often touch down on their way between northern B.C. and Mexico

70.2% of eligible citizens 12 and older in the province have received a dose of the vaccine

Nanaimo ponders taking on waste from nearby anchored freighters