Even as federal NDP leader Tom Mulcair made a subdued speech to supporters in Quebec, local NDP candidate Alistair MacGregor was being declared the winner of the new Cowichan-Malahat-Langford riding, with a healthy lead over the other four candidates.

Though his party’s seats in Ottawa were reduced substantially, and nationally the NDP’s results had to be seen as a disappointment, MacGregor was upbeat and excited by his win and the prospect of heading to Ottawa.

“The people of Cowichan-Malahat-Langford have sent a clear message tonight,” MacGregor said. “You voted for change! Rejecting the politics of fear and division, you voted for a better and more inclusive Canada. And that was a good thing.”

Speaking in person in Duncan and to his supporters in Langford by Skype, he went on to assure everyone, even those who had supported other candidates, that he was “going to fight for those values every single day.” 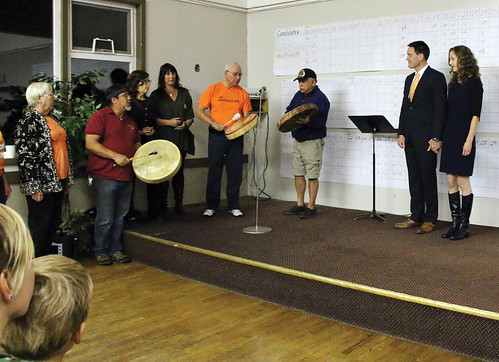 He thanked his team, “especially for keeping going when we were so tired, after an 11-week campaign.”

“I am deeply humbled by the trust you have placed in me tonight. I will work every single day with every ounce of energy I have to keep on earning that trust. It’s a very sacred thing,” he said. “I will also pledge that, as your member of parliament, I will follow in the footsteps of Jean Crowder.”

MacGregor’s arrival at Duncan Lodge enlivened the slightly subdued atmosphere that had reigned from the moment the TV pundits started predicting a Liberal majority.

Many long time supporters in the crowd were shocked at the turnaround in the country and distressed about the NDP losses, but were still pleased to see a change in Ottawa. Some were also happy that it looked like there was not likely to be another federal election soon — which had been a possibility in a minority government situation.

MacGregor looked back at the long campaign, and acknowledged the hard work of his opponents,

“It really was a privilege to campaign with them; we formed quite a camaraderie over the course of this campaign,” he said.

“I want to thank my campaign team for their hard work and dedication to our movement. This was a very long haul and you never, not once, let me down, knocking on doors in the wind, the rain and the heat. This was a campaign that spanned two seasons and sometimes it almost felt like three. You staffed the phone banks, you cooked mountains of food, you put up signs and more signs. And then you put up more signs,” he said.

“We know when the next election will be: it’s in four years. That’s a lot of time to look ahead. It’s going to make us more prepared than ever for the future.”

MacGregor had been led into the hall with drumming by First Nations elders Qwulshemut (Ray Peter), Tousilum (Ron George) and Herb Rice and following his speech, the elders led a performance of the traditional Cowichan Victory Song to celebrate the win.

With files from Andrea Rondeau

39 Days of July kicks off Friday at the Duncan Showroom