She first won our hearts as Duncan’s Idol but, even then, we all knew Glaucia Desrochers had talent to spare.

After seeing this superlative production on opening night, Friday, Nov. 27, many of us had only one question: how soon will it be before she takes it on the road? 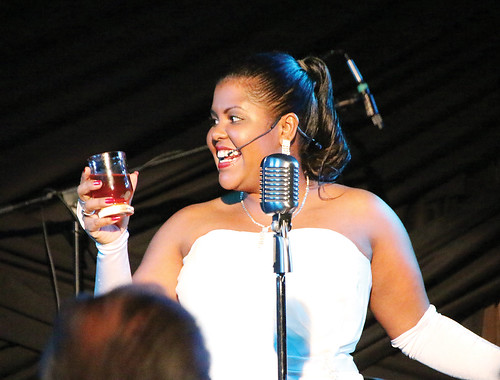 After all, Joelle Rabu built an enduring reputation on her Tonight: Piaf! one-woman show and, after seeing and hearing Desrochers, many of us saw doors opening for this Valley songbird.

Everyone who’s ever seen her sing knows she had the personal warmth and the vocal equipment for the task, but she’s never acted a role onstage before.

And taking on Billie Holiday first time out? Now, there’s a challenge!

But, with Selman’s confident support and under the skillful handling of experienced director, Michelle Tremblay, the petals unfolded and revealed Desrochers as a performer who can hold an audience in the palm of her hand.

The show’s simple concept draws in the audience right from the start: we are in Emerson’s Bar & Grill, and Billie, near the end of her career, and in fact, life, is telling us about the astonishing journey that brought her back to Philadelphia — her least favourite city in the world.

As expected, she unravels during the show, but Desrochers still manages to infuse her Billie with a shining resilience that earns the respect of her listeners.

And that brings us to the one weak point of opening night: the audience was a tad more respectful than the loud, rowdy crowd the singer would probably have been facing at Emerson’s Bar & Grill.

But that’s only natural. It’s hard to catcall when your jaw is dropped in sheer admiration of a job so well done.

She’s backed, in this show, by the tasty trio of Karel Roessingh on piano, Nick Mintenko on bass and Ron Joiner on drums and although they’re never obtrusive, their quiet support is felt throughout the show — now as it would have been then.

Check cvcas.com for updates on where to get tickets in advance and what is still available but don’t miss this one. You’ll kick yourself if you do.

You want to be one of those who says: “I remember when…”

John Reischmann and the Jaybirds head to Farm

Last chance to get in Music Festival entries

What’s coming up in the A&E scene

Province-wide travel back on in B.C.’s COVID-19 restart plan

Gathering changes include up to 50 people for outdoor events

CFL football will be played this summer in Canada

Governors vote unanimously in favour to start the ‘21 campaign on Aug. 5

Announcement applies to all individuals of First Nations, Inuit and Métis background