Outside, the sun beats down on Tyler Hayes’s Cobble Hill studio. But inside it’s even hotter.

Hayes, a glass artist, works with temperatures that hit thousands of degrees Fahrenheit.

You won’t see him blowing glass into shape over a traditional hot furnace.

The reason: Hayes doesn’t use the “soft” glass that’s been used over many centuries, he uses borosilicate glass — known as Pyrex — developed in the early 20th century.

Glass work of any kind is a hot job, but Hayes has to deal with melting temperatures of 2,500 degrees Fahrenheit. Even his kiln bakes at nearly 1,000 degrees.

He melts his glass with a torch, rather than working with a furnace.

Hayes is 38, and, while originally from New Brunswick, he now lives with his wife and two children at 3845 Cobble Hill Rd. 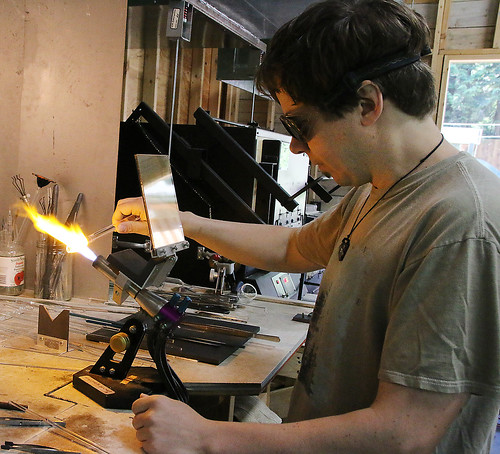 He found his way to the west coast and the world of glass art 14 years ago.

“I started this when I was 24. I didn’t even know it was in my cards really. I went to school for forestry and eco-tourism. That’s what brought me out west. I just love being in nature,” he said.

While taking the summer off, he began to see the glass work of the west coast. It spoke to him.

“There’s just so much more interest in glass all up and down the west coast. I never saw it back east. I found it really alluring.”

He eventually moved to Vancouver Island to follow his artistic muse.

“I have three different companies. One is Mystic Glass Creations, another is Enviro Glass Straw, and then there’s Hayes Designs.

“Mystic Glass is what I started 14 years ago with my business partner, Kim Reid. We did a line of pendants, and we still do it today. You’ll see a lot of our stuff at the Royal BC Museum and a lot of tourist outlets and clothing stores carry our line. We also sell a lot in the Hawaiian Islands, too. That’s why you’ll see marine [subjects], like jellyfish, starfish, waves and tidal pools in our glass.”

They’re re-usable, and they keep those unrecyclable plastic drinking straws out of landfills.

Using his kind of glass makes the straws durable and useful.

“It’s a really hard glass. That’s why it’s great for the drinking straws. You can put it in hot or cold beverages, put it in the dishwasher. It’s the strongest glass you can work with,” he said.

However, that doesn’t mean that working with “boro” is a walk in the park.

“We have to melt it in a big torch. It melts at a thousand degrees hotter than soft glass. You have to do all the work in the flame because when you take it out, it wants to stiffen really quickly. With soft glass you’ll see them go in the furnace and then come back and work it. They can play with it for a couple of minutes. They can do a lot really quickly, grab a lot at once. That’s why bowls are really great — bigger things in general — with soft glass.”

It means Hayes has to plan in advance.

“But the nice thing about my glass is less thermal shock. Like the octopuses I make; I can make the suction cups individually letting part of the glass cool while working on the part that’s warm. If you know what you’re doing, you can work your way down the glass.

“You can do a lot more detail. If you look at my tidal pools, you can see the detail of the starfish and the sea anemones. I do space scenes as well. They have been really popular. They have planets, black holes, nebula clouds. Every one is unique.”

The glass Hayes uses comes in tubes and rods, with all the colours coming in rod form or crushed, powdered glass.

He discovered that a lot of coloured glass is being made here, and he now gets the coloured glass rods he uses to make his pieces from Portland. The clear glass comes from the Czech Republic.

“I have the production line stuff. That keeps it all going on a day-to-day basis,” Hayes said. “Most artists have a production line to pay the bills because it’s hard to sell a piece of art every single day… When I have spare time, that’s when I do my art. I have a lot of things in my mind, but it’s just a matter of finding time.”

Hayes said some ideas will just have to wait for now.

“I’d like to get into chandeliers later. I also know a lot of people love paintings, but sometimes when they buy a glass thing, they don’t know where to put it. I want to incorporate the glass into some different types of wall art.”

He’s taking part in the Visions Artists Studio Tour and Sale on July 8, 9 and 10.

From 10 a.m. to 5 p.m., on each of the art tour’s three days, studios will be open as artists exhibit their finest work, their newest work and works in progress in the settings that provide their inspiration.

Check out visionsarttour.ca for more information and a downloadable brochure.

Pianist takes a journey with Beethoven in Chemainus