The Cowichan Music Festival let its brightest stars shine March 2 and March 5 at a pair of dazzling highlight concerts at the Cowichan Performing Arts Centre.

Winners in a variety of categories from speech arts to orchestra wowed audiences with a repertoire of jazz and modern dance, vocal and theatrical performances, tap dancing, piano, violin, choir and every other manner of music and artistic expression in between, showcasing the depth of talent the valley has to offer. 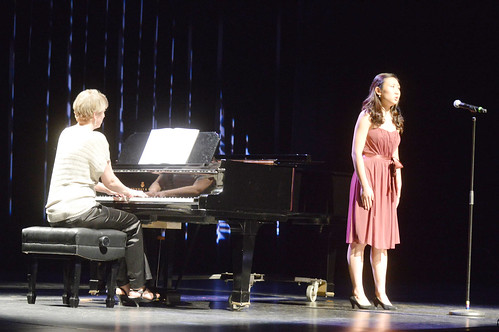 “The level is really wonderful, the music and the voice,” said festival chairwoman Leslie Sjoberg, noting that this is the festival’s 67th year.

The Francis Kelsey Secondary School Choir and FKSS Jazz Band performed to great acclaim, as well as individuals in a broad range of categories who excelled during the festival, which began Feb. 9.

“We cover dance, instruments of all kinds, bands, piano, speech and the big one at the end which is voice, which covers classical voice and musical theatre voice,” Sjoberg explained, adding that speech arts can include everything from poetry and prose recitation to monologue and dialogues.

This year’s festival has seen marked growth in a couple of categories.

“There’s been tremendous growth in dance and voice, so it’s still growing,” Sjoberg said. “They all have a joyous time in there. They come with the most wonderful enthusiasm, and the ability and level is tremendous.”

Some of those who performed in highlights concerts were also selected to represent the valley in their category at the upcoming provincials which take place May 31 to June 4 in Fort St. John.

City of Duncan to restring decorative lights in downtown core