The Cowichan Valley has heart.

The Heart and Stroke Foundation’s annual celebrity breakfast had a hearty sendoff Monday, Feb. 1, where the “Out of This World” theme and its participants’ imaginative costumes drew laughs from the audience and the 30 years of selfless service from volunteer chair Colleen Marsel drew heartfelt appreciation.

“It’s near and dear to my heart and I’m just overwhelmed by the community,” Marsel said, adding that it is the only volunteer-led celebrity breakfast in the province.

Since 1986 Cowichan Valley volunteers have raised over $247,548 for the Heart and Stroke Foundation’s valuable work in helping with cardiovascular research, health promotion and patient rehabilitation. “Cowichan Valley really is the community with heart because we are always, every year, per capita our number of fundraising is always higher than other communities our size,” Marsel said.

Marsel thanked the hundreds of local sponsors who helped make the breakfast a tasty and fun success, donated money, and donated items for prizes. 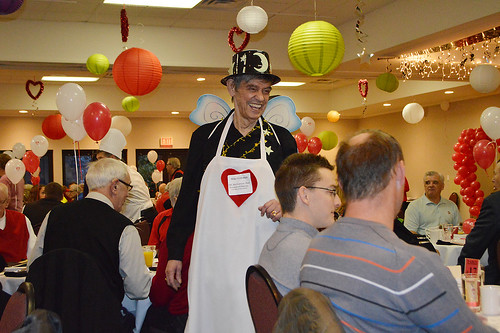 This year’s breakfast at the Travelodge Silver Bridge Inn featured various “celebrity” appearances including Darth Vader and an astronaut, while attendees enjoyed a delicious breakfast accompanied by some dancing from Carlson’s School of Dance and the witty repartee of emcee Cam Drew.

“Every year there’s always lots of people that dress up and every year it’s a different theme. So we just pick a theme and run with it,” explained Marsel, who has been the driving force behind the breakfast as well as being involved with every other foundation fundraiser. “This year was ‘Out of this World’ because we want to break that $15,000 fundraising goal and we thought we’re going to go out with a bang.”

Marsel informed the Citizen on Tuesday that $14,109 was raised by the breakfast, falling just short of the goal.

In terms of improvements in cardiovascular health over the past decades, they have been significant. According to statistics from the foundation, in the last 60 years deaths from cardiovascular disease have been reduced by 75 per cent, while infants born with heart defects have gone from a 20 per cent chance of survival to 90 per cent.

Marsel herself got involved because of how much advances in cardiovascular medicine made a difference to her family.

“First of all it was my grandmother who had a pacemaker and so she lived for many years because she had the pacemaker,” Marsel said. “Then my father had open heart surgery — emergency open heart surgery — in 1992. He’s 90 and he’s still here and that’s why I continue and many others even at the head table: because of their family situation.”

Marsel hugged friends and well-wishers following the breakfast and presented certificates to many in the community who had helped out with the event through the years including longtime volunteer Carol Mills, whose husband David lived more than 20 years after receiving a heart transplant and died around 18 months ago. The Millses helped out at the breakfasts right from the start.

“I wanted to recognize those especially whose spouse may have passed on and just thank them and really let them know how much they’re appreciated,” Marsel said.

CEO of the Heart and Stroke Foundation, BC & Yukon Adrienne Bakker said the foundation picks out the best research on which to move forward to make strides in cutting down heart and stroke deaths.

“Our research in Canada goes through a very rigorous peer-review process and then researchers submit their applications from across the country. Only the best research gets funded,” she explained.

Bakker noted that research is currently going on, for example, on the correlation between diabetes and heart disease.

“We’re looking at the links between dementia and stroke as well, and cardiovascular disease, because when you have less blood flow to the brain that affects heart function,” Bakker said.

For Marsel the chance to help out a cause so dear to her and connect with great people around the valley has meant the world to her, especially in light of the recent death of her mother.

“This community always gives and I wouldn’t be able to do this for 30 years if it was not for the community,” said Marsel at the breakfast, in which she thanked numerous local sponsors and the community for its dedication to helping out, as well as the foundation itself. “Everyone at Heart and Stroke is very dedicated and very professional and I’ve really appreciated your support and love over so many years.”